GamerCon 2017: Frustrations at what could have been the best Games Convention in Ireland

GamerCon Dublin. Billed as the largest video game convention ever held in Ireland, but is it a victim of its own success or was it a complete shambles?

Ferdi Roberts, CEO and Organiser of GamerCon, saw an opportunity in the Irish Market with close to €250m being spent each year on Gaming in all forms. GamerCon, announced in July 2009 was to be a convention focused entirely on the Consumer Gaming sector. The initial launch described an event that "expects to host over 8000 gamers across two days … March 18th and 19th 2017" to be held at the Convention Centre in Dublin.

By focusing on all aspects of consumer gaming (PC, Mobile, Console and VR) the event wanted to be family friendly and not to focus only on the Hardcore gamer. Games like Minecraft, Lego or Rocket League would appear in a Kids Zone, Retro Zones would allow parents to introduce their children to games from their childhood while more action-oriented games like Titanfall 2 and Zombies would appear in Mature Zones. eSports tournaments would introduce competitive gaming to a wider Irish audience and various famous YouTubers would be on hand for meet and greets and talks.

GamerCon struck a chord with the intended market in Ireland and by November, the plan had increased from 8,000 gamers across the two days to over 20,000 intended visitors and plans to expand across Europe. In an interview with the Irish Times, the GamerCon founder said that negotiations were already in their final stages for a similar event in London.

Attracting major sponsors such as GameStop, Microsoft, Sony and HP’s gaming PC brand OMEN the prospect of reaching the local gaming community, the market was clearly ready to support the idea of GamerCon.

In just under six months from the original announcement, the size of the convention had trebled. By February, while speaking about the convention on RTÉ’s Today Show, Ferdi Roberts announced that they were expecting over 24,000 people to attend the event over the two days.

The Convention Centre in Dublin is a flexible venue, with up-to six floors that can be used for an event of this nature. The building can hold between 7,000 and 9,400 attendees depending on the configuration and setup arranged with the

At this point, the math of the situation start to come into play. If the building can hold a maximum of 9,400 people at the same time and 12,000 tickets sold for each day, then it would be necessary for at least 3,000 people to go to the venue and leave to ensure that there would be room for others to enter. This is not unheard of, as major theme parks and attractions often oversell their daily ticket capacity based on the same assumption. Airlines will sometimes overbook planes with the assumption that sometimes people will miss their flight for various reasons.

Any decision regarding ticket capacity and visitor throughput should have been made between the organisers and the venue, with the venue ultimately responsible for the health and safety capacity of the building.

Arriving at the venue shortly before opening time on Saturday, there was a short queue of about ten minutes for day ticket holders or about two minutes for VIP ticket holders, who had paid a premium to skip the major queue to enter. Security fencing and marshals were in place to direct visitors where to go to join the queue and what to expect from queue times.

Welcomed by the brightly lit foyer of the Convention Centre, attendees were invited into the Forum where key sponsors GameStop, Razer, Sony, Microsoft (Xbox) and HP Omen were displaying their wares among other displays such as the Retro Zone and Console Gaming sections.

The Retro Gaming zone had many blast from the past: N64 versions of GoldenEye and Super Mario 64 were set up alongside Sonic the Hedgehog on Megadrive and Street Fighter II on SNES. Multiple generations of Mario Kart were available. Dreamcasts, GameCubes and original Xbox and PlayStations that all made for a trip down video gaming memory lane – not to mention the interesting array of CRT televisions to hook these older consoles up.

It is as you move to the more modern consoles that some of the issues appear to occur: Several consoles required system updates when they were switched on, taking over 30 minutes to download the update on the crowded network at then install the software. Controllers also required firmware updates, sometimes prompting during the game play, adding further delays before gamers could get stuck into playing the latest games with friends.

For those who arrived early, the first moments were spent finding a station that was ready to play and either pick up the controller or join the queue. Somewhat reminiscent of an arcade of old, putting your 50p down to ensure that you could play next.

The ten-minute queue outside the Convention Centre at opening time grew.

By 11am, the queues and the crowd inside the Centre also grew. Lengthy lines began appearing at the escalators and at various stands. At a stand belonging to one of the major console manufacturers, gamers were almost being asked if they were finished just as they sat down to play because someone else was already waiting.

The queue outside grew further. By 1pm, gamers and their families stood in a queue that snaked around the building for several hours in the inclement weather.

Disappointed gamers took to social media to vent their frustration. 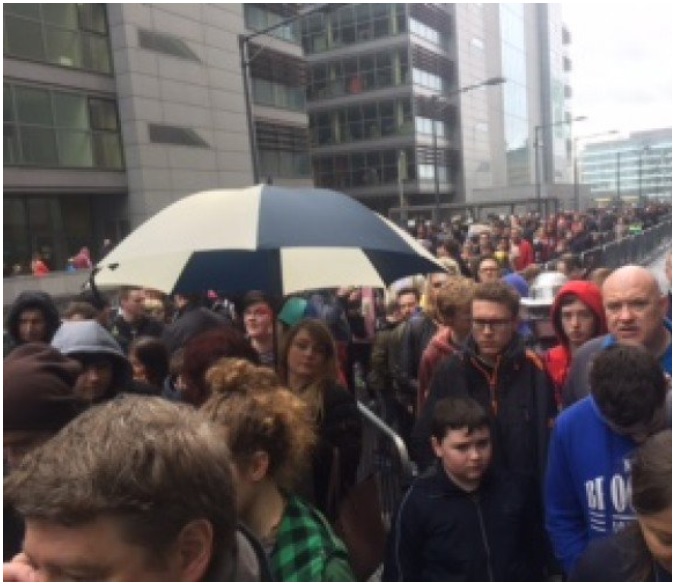 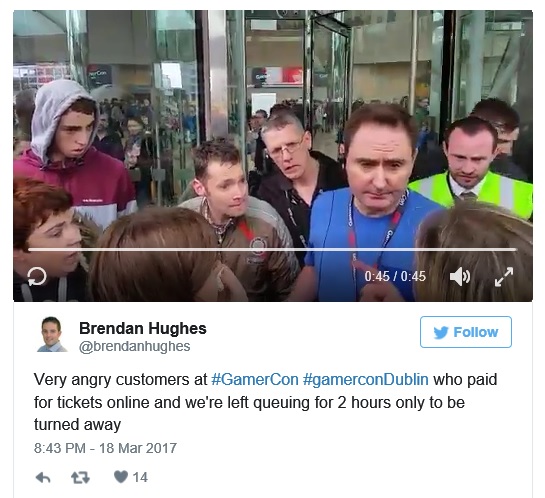 A statement issued by GamerCon on Saturday apologised for the significant delays experienced: “As a first-time event we underestimated the traffic flow that we forecast for the event and have very strict health and safety-related capacities which we must adhere to.

“That temporarily impacted our ability to process the queue which resulted in longer-than-expected wait time for our attendees.”

Promising to learn from the experience, guidance was provided to those attending on Sunday on how to optimise their visiting times to lessen the risk of queueing. Although queues outside the event were significantly reduced on Sunday, closer to 30-45 minutes, there were still some lengthy queues inside for some stands and YouTube meet and greets.

“There were ... issues with queues within the building. This was not under GamerCon’s direct control – the Convention Centre Dublin are responsible for people management and public safety within their building.

“The Convention Centre Dublin were fully aware of the ticket sales and expected numbers of attendees.

“It should also be noted that capacities and ticket sales were discussed and jointly agreed with our venue partner the Convention Centre.

[if !supportLists]- Ferdi Roberts, Founder and CEO of GamerCon

GamerCon started to offer refunds on Saturday to anyone who was unable to attend the event. A refund would only be available if your ticket was not scanned on the way into the Convention Centre.

Much of the coverage in the media has focused on the frustrations and failings of the event. The bad press generated by the queueing on Saturday will take some time to clear. When the dust settles, it will be time for GamerCon’s organisers to see what happened and learn from this experience.

Having started with a modest vision of 8,000 attendees over the two days, for a first year, the organisers could have stayed the course with this smaller event size. Use it as a test bed to iron out any teething issues. GamerCon had envisioned this Dublin event to be the first of many around Europe this year and a bigger event in Dublin next year.

Other conventions in Dublin had a rough time at launch. The Web Summit had growing pains and WiFi issues at the RDS, so much so that they left the city and moved to Lisbon in a much publicized move – only to experience issues on their opening night that meant many ticket holders, including corporate ticket holders, were locked out of the event on Health and Safety grounds.

In Germany, Gamescom, was previously held in Leipzig and there were protests when it was decided to move it Cologne for logistical and sizing reasons and it has proven to grow exponentially with over a quarter of a million attendees flooding through the doors every year.

While the final tally is not known, somewhere in the region of 20,000 attendees actually got in to the event in the Convention Centre. GamerCon had clearly identified a gap in the market for this type of event.

Calm heads and a clear review will help GamerCon ensure that the next event, if they decide go ahead, will be flawless. Being open and addressing head-on the shortcomings of the ticketing and venue should help repair the badly broken faith of the families who attended on Saturday. Anything less could be the end for the GamerCon brand before it even gets off the ground. That, without something taking it's place, would be a phenomenal loss for the Gaming community in Ireland.